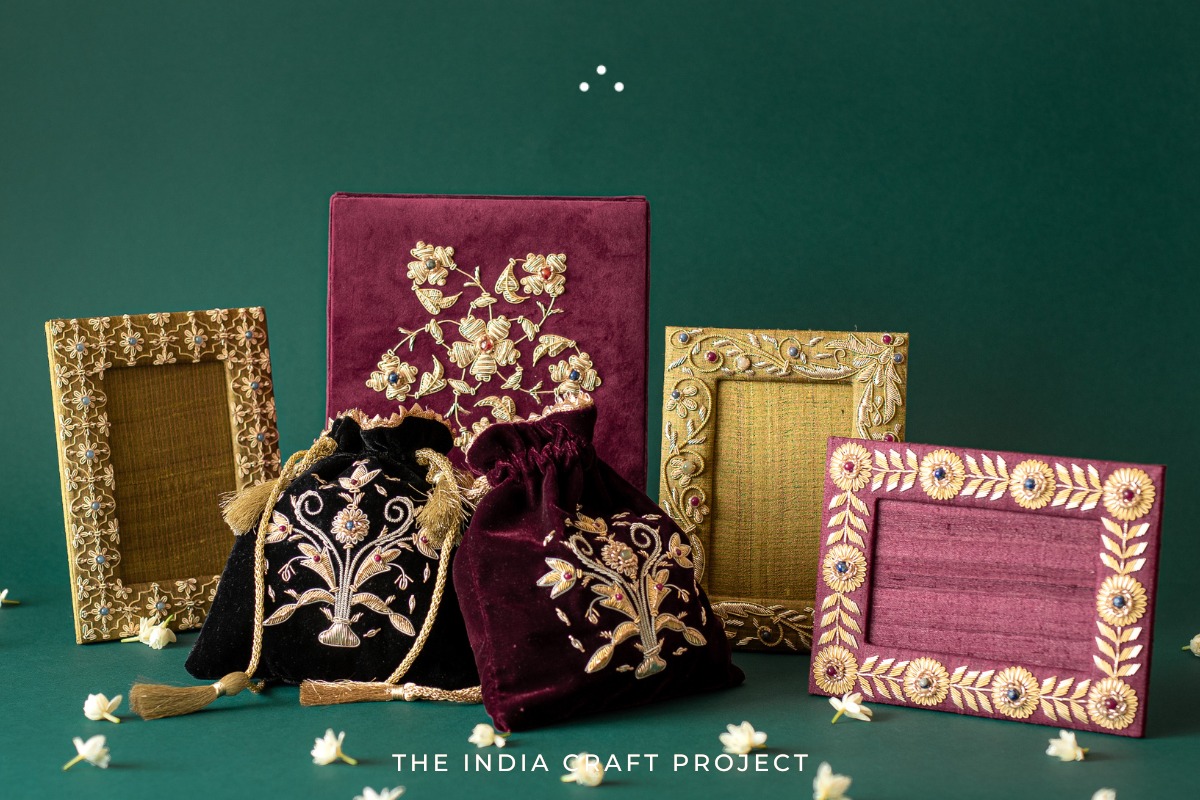 Sitting on his grand Durbar, having a puff out of his regal Hookah, there was an evident reason that Firoz Shah Tughlaq mentioned a word-of-oblivion ‘Zardozi’ in his autobiography, the ‘Futuhat-i-Firozshahi‘. The word was jotted down to refer to the embroidery that is carved with ‘Zari’. Who knew back then that this word will carry such a revolutionary heritage even after a magnanimous 800 years? This was the origin of the popular craft of ‘Zardozi’ through historic records. Before that, the earlier form of a similar art was known as ‘Kalabatun‘ in which golden wires wrapped around silk threads were used to make three-dimensional patterns for decorations and ornamental purposes. The different types of attire during the Tughlaqi period were later improvised and incorporated with its newer version, the Zardozi, at a community level by professional ‘Karkhanas‘ (factories), providing one of the first pieces of evidence that contributed to the commercial inception of Zardozi.

Let’s travel forth in time, into the Mughal era which further added to the elegance and opulence of Zardozi as a signature of the aristocrats and blue blood. The Begums adorned themselves with kajal-clad eyes, intricate mehndi work in their delicate hands, and supple red lips, tainted with the mild reds of betel. Their elaborate Zardozi collections enhanced the breathtaking beauty at many different levels. It was a material gesticulation of luxury and high-end sophistication. Moreover, the favorite pets of the Badshah were bejeweled with Zardozi ornaments that defined their special place in the heart of the ‘Shah‘. The love of Zardozi during the Mughal era can be considered one of the initial milestones that set the craft into what it is today. 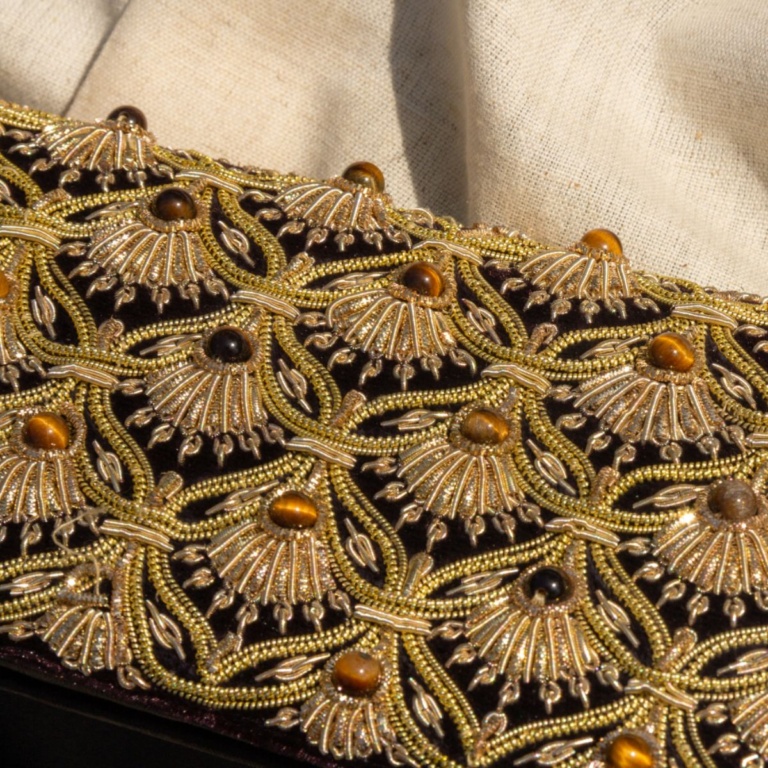 Now, it’s the time of the golden 1960s. With Bollywood cinema slowly rising to the glamour quotient, ordinary Indian women started being conscious of their fashion choices. Thanks to the amazing legacy of films like Mughal-e-Azam, and Brahmachari, women were aware of the changes in the fashion industry around them. Around this time Zardozi started reaching ordinary people. Lucknow and Agra being its primary hub, now, Zardozi has reached PAN India cities like Hyderabad, Delhi, Kashmir, Kolkata, Varanasi, and Farrukhabad.

The first step of the process involves tracing the design from paper to the fabric. It starts with dipping the fabric in a solution of royal blue color and kerosene. The paper is kept above it and the design is traced accordingly. Framing the fabric in an ‘Adda‘, natural bamboo or wooden frame gives the fabric a tighter surface. This makes it easier for the artisans to work on the traced design. The sewing and embroidery are not done with an ordinary needle. Rather, a quilting needle is fixed on a wooden stick called ‘Ari‘. It speeds up the whole process which now takes ten days to complete.

For the metallic threads, nowadays an alloy of gold and silver is used as it increases the agility of the thread and bends to take required forms, with minimal effort. Such a characteristic of the thread is referred to as ‘Dabka‘. Also, budget-friendly copper wires have also replaced the aforementioned options making the craft accessible to everyone. With a rise in popularity, many well-known designers have started using Zardozi elements in their creations. Moreover, economically sound machines are available to simplify the tedious jobs of artisans. This has helped a tad bit in upholding the craft and increasing its customer base.

You’ll be amazed to know that in metro cities, a major chunk of the employees is women with a percentage of over 10-15. It is great to see the influence of women’s empowerment and artisanal legacy combined under the same roof of Zardozi crafts. Moreover, children are given the requisite education for the craft starting at an age of six. This is bringing youth power into the industry. 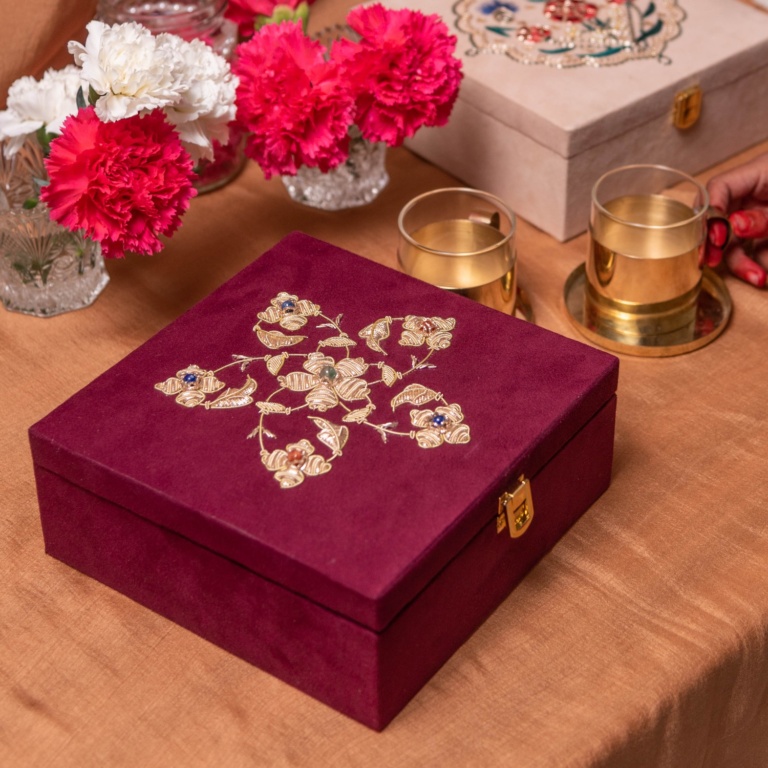 Starting from the 12th century till now, the craft of Zardozi has evolved. Nonetheless, its eternal elegance stays intact amidst the huge rise in consumerism and bling of showy products. The need of the hour is to publicize this intricate craft form so that the ‘ban-than-kar’ days of the palatial era return back to the common yet fashion-conscious mass of the nation. The TICP Zardozi range is an ode to the dedicated artisans who have kept this historic legacy alive for centuries. With Potlis and photo frames, and many more to serve, we can vouch for the fact that you will be taken to the alleys with an earthy essence of the long-lost pasts. 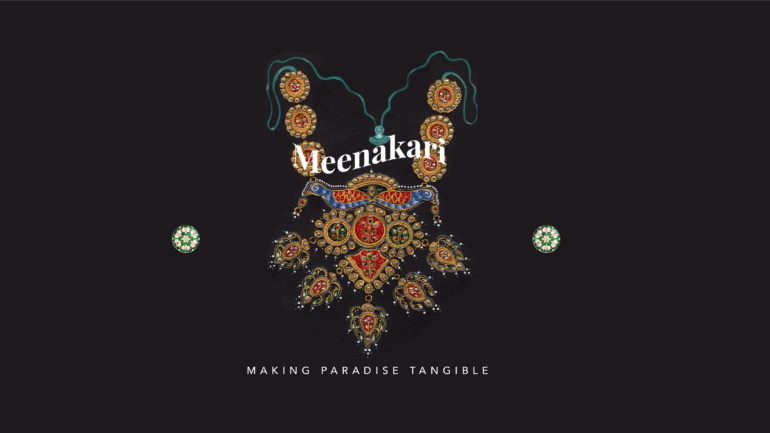 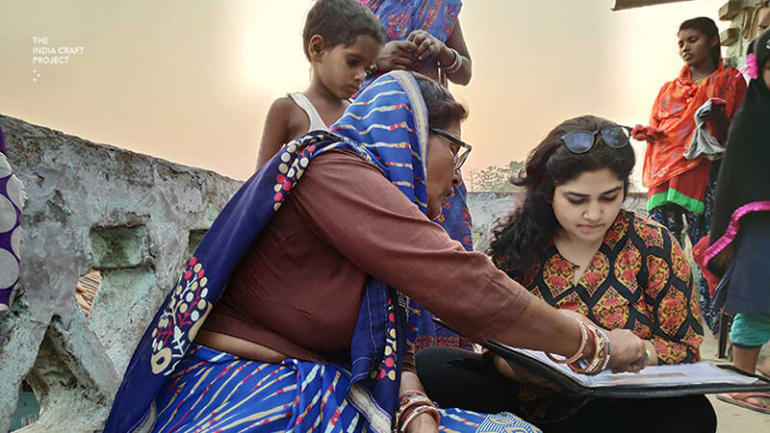